*After all, the audio tape of an April 25, 2015 Peace Bridge Authority meeting reveals a concerted effort by the Cuomo Administration to keep plaza expansion opponents uninformed*

Question No. 1: Governor, you must have been very upset with Peace Bridge Authority Chair William B. (“Sam”) Hoyt III when you learned of the August 6, 2014 article in the Buffalo News, “Plotting at the Peace Bridge.”  How would you rate your anger toward Sam on a scale from “zero to ten” if “ten” equals the way you felt this week when the New York Times editorial board refused to endorse you over your challenger in the September 9th Democratic primary, Fordham Law School professor Zephyr Teachout, and then selected Ms. Teachout’s running mate, Tim Wu, a Columbia University law professor, rather than your choice for lieutenant governor, Kathleen C. Hochul?

Question No. 2: You appeared at a press conference in Niagara Falls the day after the “Plotting at the Peace Bridge” article hit the newsstand. When asked about Sam Hoyt’s use of the term “brainwash” regarding efforts to build support for projects at the Peace Bridge, you said: “I don’t know the context it was used in. My understanding is the person said it was a misuse of, misspoke, and we all do that once in a while. I know I do that every once in a while.” Governor, did you actually forget the name of Sam Hoyt, the person who, thanks to you, is Chairman of the  Peace Bridge Authority and a high-ranking official with the Empire State Development Corporation? Or were you still too upset to mention him in public?

Question No. 3: By the way, do you think that Sam Hoyt “wears too many hats” and, for that reason, has real conflict-of-interests problems? After all, even Sam seems unable to keep his roles straight. The “apology” letter that he sent on August 14, 2014 to North District Councilmember Joe Golombek used “Empire State Development” letterhead, despite the fact that Sam signed it in his capacity as “Chairman, Buffalo & Fort Erie Public Bridge Authority.” 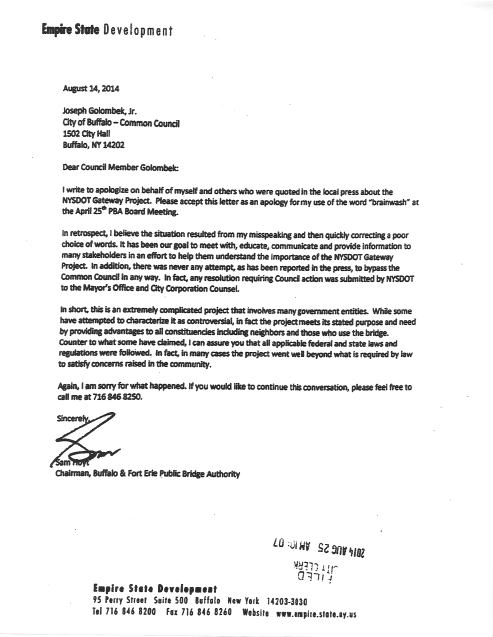 Question No. 4: Mr. Cuomo, did you and Mr. Hoyt discuss the content of the “apology letter” before he sent it out to Mr. Golombek and other members of Buffalo’s Common Council?  I noticed that, for the first time since you became governor of our fine state, a communications regarding Peace Bridge expansion plans did not include multiple references to you and how determined you are to obtain “results” for Western New York.

Question No. 5: Governor, as an advocate for transparency and accountability, were you appalled when you heard that a member of your administration, project manager Maria C. Lehman, took conscious steps to keep potential opponents in the dark about NYSDOT environmental studies and the State’s efforts to gain City of Buffalo approval for necessary easements and land transfers?   Or was Ms. Lehman just following orders?

Question No. 6: In an August 23, 2104 editorial, the Buffalo News places the blame for the “very sneaky” and “duplicitous” efforts to deceive the public regarding Peace Bridge expansion plans squarely on the shoulders of Ms. Lehman.  As Governor (and future King), don’t you believe that responsibility for what occurred before, during, and following the April 25, 2014 PBA board meeting should be borne by the officials in a position to set the tone, that is, PBA Chair Sam Hoyt and you, his boss?

Question No. 7: Governor, you weren’t surprised, were you, by the poor judgment shown by Mr. Hoyt, both in developing (or, at a minimum, acquiescing to) deceptive strategies to ensure prompt results at the Buffalo end of the Peace Bridge, and in using the term “brainwash”? After all, prior to selecting him to be such an influential member of your administration in Western New York, you were certainly aware that Sam had demonstrated the ability to exercise extremely poor judgment while serving as a member of the New York State Assembly.

Question No. 8: So, after all this, is it still fair to think of Sam Hoyt as Andrew Cuomo’s “eyes and ears” in Western New York?  Some people, you know, are getting the impression that he has morphed beyond that limited role and now reflects his boss’s “heart and soul,” arrogant and acting as if he’s above the law.