NOT ALL LUNGS AND NEIGHBORHOODS ARE CREATED EQUAL

Western New York’s most prominent newspaper and New York’s senior senator have raised their voices on behalf of citizens subjected to unhealthy conditions.

An October 20, 2014 Buffalo News editorial concluded that a “crematory simply isn’t appropriate in a densely populated neighborhood,” such as the one surrounding the Amigone funeral home in the Town of Tonawanda. Odors, smoke and soot that emanated from the building have depressed property values and affected the quality of life.

U.S. Senator Chuck Schumer recently visited Buffalo’s Seneca-Babcock neighborhood to express concerns over the negative impacts dust from a concrete crushing operations was having on nearby residents. According to the senator: “It’s quality of life we’re talking about. But it’s more. Residents of this neighborhood have been battling with health issues. People suffer from migraines, bloody noses and, in some of the worst cases, people have reported trouble from breathing and their kids with asthma.”

But the Buffalo News and Sen. Schumer have not used their substantial influence to protect the health and quality of life of the residents living near the Peace Bridge. They’ve chosen silence, although the lower West Side community is even more densely populated than the neighborhood surrounding Amigone’s crematory.

And the connection between diesel exhaust and severe health problems, especially childhood asthma, is irrefutable. 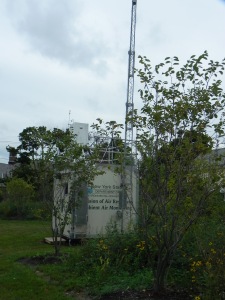 No one can rationally suggest that a busy international border crossing – that sees 1.24 million trucks annually – is appropriate in a densely populated residential neighborhood.

But money talks, and, apparently, not all lungs and neighborhoods are created equal.

P.S.  A version of this post was published in the Nov. 6, 2014 weekly edition of ArtVoice, http://artvoice.com/issues/v13n45/letters_to_artvoice/lungs