Chautauqua Institution: Beyond The Law

Government-like powers, without constraints, results in the demise of a national treasure.

Full Disclosure: I represent a group of preservationists and property owners who commenced a court proceeding to prevent demolition of the 123-year-old Chautauqua Amphitheater. But this is written on my own behalf as a concerned citizen, not as anyone’s lawyer.

The irony is palpable. Chautauqua Institution is acclaimed as a national forum for open discussion of public issues, democratic values, science, literature, and religion. But, as a corporate entity, it functions in a space beyond the reach of state and local laws which were enacted to enhance the quality of life, protect our environment, preserve historic resources, and foster transparency. 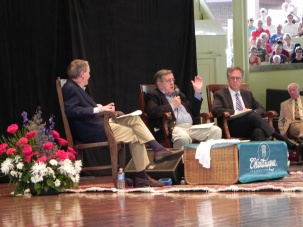 Whether this situation is the result of unintended consequences, or a diabolical scheme, the governing body of Chautauqua Institution [“CI”] – that is, its 24-member Board of Trustees – wields land use and fiscal powers with far fewer constraints than our democratic system has wisely placed on its state and local officials:

1. Exemption from the town’s zoning requirements. The Town Board of the Town of Chautauqua amended its town code in 1994 to exempt CI’s main grounds from the requirements of the town’s zoning law. It justified this unusual move by referencing “the uniqueness of Chautauqua Institution,” and noting the comprehensive nature of the Institution’s own land use regulations. In doing so, the town’s role was reduced to ministerial functions, such as issuing building permits, while CI took full control of land use management within is fenced-in campus. That decision has enabled the CI Board of Trustees to approve demolition of the historic Chautauqua Amphitheater [“the Amp”] with virtually no outside oversight or interference. It has also deprived private property owners within CI’s main campus of procedural protections and review processes available to the vast majority of New York State residents. 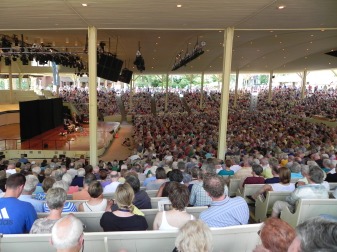 2. Exemption from the Institution’s own land use regulations. CI’s Board of Trustees has promulgated and oversees the enforcement of a comprehensive, 124-page set of rules known as the “Chautauqua Institution Architectural and Land Use Regulations” [“ALUR”]. ALUR includes a reassuring “Affirmation of Purposeful Stewardship” acknowledging the following principle: “Maintaining the physical fabric of the Chautauqua grounds is an essential contribution to safeguarding the historic, cultural, and aesthetic integrity of the Chautauqua Institution.” It also proclaims, with eye-catching emphasis, “WE ARE THE STEWARDS OF A NATIONAL TREASURE.” 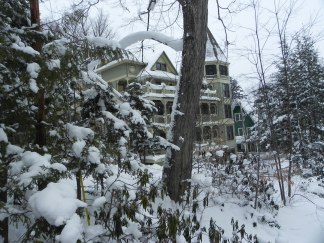 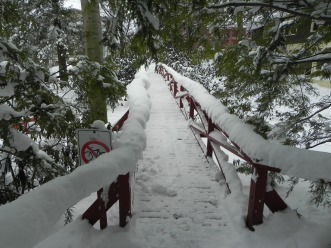 There is, however, a major flaw. ALUR does not apply to property owned by Chautauqua Institution itself, only to the residences, hotels, and other real estate owned by individuals. The Institution’s land, including substantial open space and recreational acreage, and an estimated 100 buildings, falls outside the reach of CI’s own regulations and the town’s zoning requirements. This is a status akin to a sovereign’s unfettered control of its land, most inappropriate for a not-for-profit corporation in a democratic society.

3. Freedom from environmental review mandated by SEQRA. The State Environmental Quality Review Act [“SEQRA”] places an affirmative duty on all state and local government agencies to objectively assess whether a proposed project may have a significant adverse impact on the environment prior to making a “discretionary” decision to approve or fund the project. SEQRA’s definition of “environment” is broad, and expressly includes historic and aesthetic resources.

Zoning decisions by a town – such as zoning amendments, variances and site plan review – ordinarily trigger the SEQRA review process. By exempting CI’s main grounds from compliance with the town’s zoning regulations, the Town Board has eliminated “discretionary” decisions that would otherwise be preceded by the environmental review – leaving proposals such as demolition of the existing Amp and construction of its replacement beyond SEQRA’s protections.

CI’s Board of Trustees is not a state or local agency, and, therefore, has no obligation to comply with SEQRA. As a result, the owners of property within the Institution’s fenced-in campus are deprived of a crucial benefit enjoyed by other Town of Chautauqua and New York State residents: SEQRA’s substantive and procedural safeguards. The injustice of this deprivation is underscored by the fact that the real property owned by individuals within the Institution’s gates accounts for over half of the town’s total assessed valuation (and, one might assume, over half of its tax revenue).

4. Freedom from the Waterfront Consistency Law’s “consistency review”. In March 2008, the Town of Chautauqua approved the Chautauqua Lake Local Revitalization Program (LWRP) as a tool to preserve, enhance and utilize the natural and man-made resources along its waterfront area. The Chautauqua Institution grounds are included within the protected area. 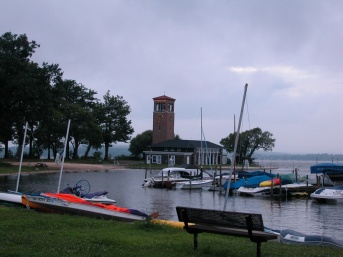 Two months after adoption of the local waterfront program, the Town Board enacted the town’s Waterfront Consistency Law [“WCL”], which requires all “actions” undertaken within the waterfront area to be evaluated for consistency “with the LWRP policy standards and conditions.” Cynically, what the WCL appears to give with one hand, Chautauqua Institution and the Town of Chautauqua now argue it takes away with the other. The Institution and town insist that the WCL’s consistency review requirement is only triggered where the project requires a discretionary approval, and maintain that the only approvals required for the Amp project – as a result of the exemption of CI from the town’s zoning regulations – are non-discretionary approvals such as demolition and building permits.

Accordingly, Chautauqua Institution did not apply for, and the Town of Chautauqua did not require, a “consistency review” to determine whether demolition of the nationally acclaimed Amp is consistent with the LWRP policy to “preserve historic resources of the waterfront area of Chautauqua Lake.” This omission stands in sharp contrast to the burden state law places upon all state agencies. If New York State is considering a project within a waterfront area protected by an LWRP, it must conduct a “consistency review” prior to proceeding with the action.

5. Inapplicability of “Open Meetings Law” and “Freedom of Information Law.” New York State citizens have two protections intended to lessen arbitrary decision-making by government agencies and officials, and enhance the transparency of the governmental decision-making process: the “Open Meetings Law” and the “Freedom of Information Law” [“FOIL”]. Despite the government-like powers wielded by CI’s Board of Trustees, a 2011 ruling by a state appellate court holds that the Institution is not acting on the state’s behalf when it regulates activity on its grounds, and, therefore, that it is not “a public body” and is “not subject to the requirements of the Open Meetings Law.” The same legal principle would exempt Chautauqua Institution from the requirements of FOIL.

Without the protections afforded by these important state laws, CI’s land use and development decisions are allowed to take place behind closed doors rather than in an open and public forum.