Incomplete, inaccurate, and inadequate information submitted on behalf of the developer – Gerry Buchheit’s Queen City Landing, LLC – regarding the latest proposal for the former Freezer Queen site on Buffalo’s Outer Harbor renders the public hearing scheduled for April 4, 2016 a waste of the public’s and Planning Board’s time.

Somebody in the City of Buffalo’s Planning Office decided to schedule an April 4, 2016 public hearing before the City Planning Board regarding the design and site plan application for “The Apartments at Queen City Landing.”  The project is proposed for a prime Outer Harbor parcel at 975 Fuhrmann Blvd., just north of the Buffalo Harbor State Park.  Had the Planning Office staff objectively reviewed the developer’s application – which was filed on March 15, 2016, the deadline for anyone wishing to get on the April 4th calendar – she or he would have realized just how inadequate the developer’s submissions are.

To prevent a substantial waste of time and resources – by the public, the Planning Board, and other interested parties – the Planning Office or Chairman of the City Planning Board should immediately announce that the public hearing will not be conducted on April 4, 2016, and will not be rescheduled until, at a minimum, the following deficiencies are corrected:

I.  The parcel’s zoning status is verified.

But the developer has discovered that “CM” – General Commercial District – provides, in its words, “favorable use and bulk standards for mixed-use development.”  [In other words, CM zoning status may allow them to get away with a 23-story tower on the Outer Harbor.]  Rather than focusing on the M3 requirements for the parcel, or taking the time to verify whether or not the property was rezoned a number of years ago to CM, Quaker City Landing’s cover letter to the City Planning Board fudges on the site’s zoning status, stating:  “[W]e will assume that the Site is or will be zoned CM.”  [Click here to see the Queen City Landing Cover Ltr 03-14-16.]  That simply is neither adequate, nor appropriate.

II.  A “Full Environmental Assessment Form” is filed under SEQRA.

The applicant has submitted what is called a “Short Environmental Assessment Form” [SEAF] to purportedly assist the “lead agency” in assessing the potential adverse environmental impacts likely to occur if the proposed project were to be approved.  [Click here to see the Queen City Landing SEAF 03-14-16.]  The SEAF – a two-and-a-half page form – is palpably inadequate for analyzing 23-story, 370,000-square-foot mixed-use facility located along Lake Erie on land historically used for industrial purposes.  It provides the Planning Board and the public with only the most perfunctory information (even if we presumed the questions were faithfully answered).

SEQRA prohibits use of an SEAF for a “Type I action,” which are projects of sufficient scale and/or sensitivity that a thorough environmental review pursuant a Draft Environmental Impact Statement (DEIS) is presumed to be needed. For a “Type I action,” a project sponsor or applicant must provide the lead agency a “Full Environmental Assessment Form” [FEAF] to be used to determine whether or not the proposed project [“action”] will have a significant adverse impact on any one aspect of the environment.  Given the fact that the proposed project is not simply a “residential” development, but, as characterized in the applicant’s cover letter, is a “mixed-use facility,” it meets the SEQRA regulation’s thresholds for a “Type I action.”  More specifically, under SEQRA, construction of a project other than a “residential” facility is a “Type I action” if it involves: “the physical alteration of 10 acres” [the SEAF states that 11.00 acres will be physically altered]; or, in a city the size of Buffalo, construction of “more than 240,000 square feet of gross floor area” [the SEAF indicates that the tower alone “totals approximately 274,000 gross square feet”]; or, the action consists of activity or construction occurring “substantially contiguous to any publicly owned or operated parkland, recreation area or designated open space” [the applicant’s site plan shows that the parcel fronts on the public bike path].

Importantly, whether or not the proposed project is determined to be a “Type I action” under SEQRA, an agency – such as the City Planning Board – is authorized to require the applicant to provide an FEAF if “the short EAF would not provide the lead agency with sufficient information on which to base its determination of significance” [that is, the lead agency’s decision whether or not “that action may include the potential for at least one significant adverse environmental impact”].  The Queen City Landing project is undoubtedly such an action.

The individual who submits an SEAF or FEAF to a government agency must affirm at the end of the form that “the information provided above is true and accurate to the best of my knowledge.”  The SEAF was affirmed, despite the following responses:

(a) The SEAF only refers to the gross square feet of the tower – approximately 274,000 gsf – and fails to provide information on the square footage of the other proposed structures.  According to the March 24, 2016 article in Buffalo Business First, “The entire Queen City Landing complex will encompass more than 370,000 square feet.”

(b) The SEAF makes no mention of the Site Plan’s reference to “Future 10-Story Building With Structured Parking” at the west end of the 20-acre parcel.

(c) The SEAF answers “Yes” to the inquiry, “Is the proposed action consistent with the predominant character of the existing built or natural landscape?”  This answer is in the affirmative despite the total absence of any towers at the Outer Harbor, the presence of the small boat harbor nearby, as well as the other parkland, recreation areas, open space, nature preserves, etc.  The packet submitted by the applicant’s engineers/architects includes elevations showing that the 23-story tower will be 324 feet in total height: 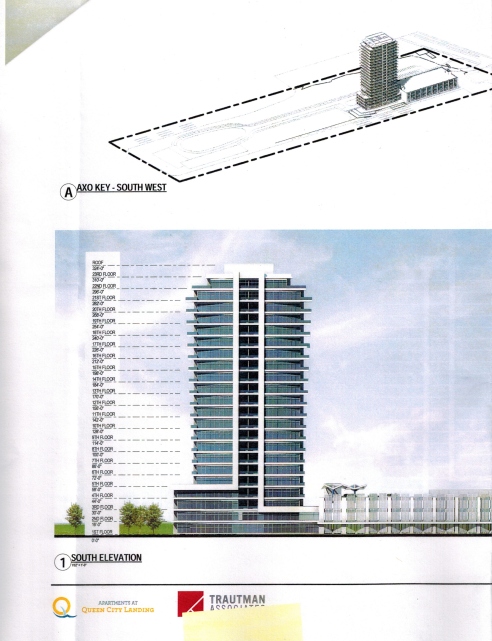 (d) The SEAF answers “No” to the question, “Will the proposed action result in a substantial increase in traffic above present levels?”  So, according to the SEAF, this 23-story facility, with at least 158 apartments, two restaurants, a night club, a fitness center, and off-street parking for a minimum of 255 vehicles, would not generate many more vehicle trips than the currently abandoned Freezer Queen facility.

With all due respect,