The Moot Senior Center at 292 High Street – in the shadow of the Buffalo Niagara Medical Campus – will host a discussion on Wednesday, October 19, 2016, from 5:30 to 7:00 PM, entitled “Gentrification: A Social Justice Issue,” led by Prof. Stacey Sutton of the University of Illinois, Chicago’s College of Urban Planning & Public Affairs.  As  the event’s flyer, Gentrification-a-social-justice-issue, warmly requests: “Come to listen and to participate; bring your observations, questions, and thoughts regarding urban redevelopment; participate in positive change for Buffalo’s East Side and especially the Fruit Belt neighborhood.”

[Note:  This blog has discussed gentrification-related issues a number of times, including, for example, here, here, and here.]

Regarding the all-too-frequent “teachable moments” we find ourselves subjected to as residents of the Greater Buffalo, New York metropolitan area, what can be said.  As Buffalo News columnist Rod Watson wrote in a November 29, 2012 column, “[T]his is the region that backed the gubernatorial candidate who forwarded racist emails about the president and first lady.” [And, not surprisingly, that unsuccessful candidate for NY’s governorship is now a staunch backer and apologist for an equally unsavory Republican Presidential candidate.] Mr. Watson’s column, entitled “confronting-a-sign-maker-on-harsh-turf,” was a response to a hand-made sign exclaiming “VOTERS RENIGED” displayed in the front yard of a Town of Aurora retiree who was upset with the re-election of Barack Obama as our nation’s President.

Not long after Rod Watson’s column (which had been preceded by an article – “a sign-of-free-speech-or-of-racism?” – by Buffalo News reporter T.J. Pignataro), the conspicuously misspelled “Reniged” was replaced by “Reneged” – although the reverse side of the sign continued to shout: STILL NO PRESIDENT.

A little unflattering publicity, apparently, can bring about some improvement. [At the time, hoping that would be the case, I used the Town of Aurora lawn sign incident as the impetus to write a letter-to-the-editor of the East Aurora Advertiser imploring Village of East Aurora residents (my neighbors, then) not to let “teachable moments” slip away. My missive focused on an unpleasant incident that many men, women and children had observed the previous summer during a soccer game between my twelve-year-old son’s East Aurora team and a team from a Yemini neighborhood in Lackawanna.]  [See advertiser-re-renige-sign-teachable-moment-12-03-12.]

Buffalo’s latest unsavory expression of racial disharmony occurred this past week a mile or two down Seneca Street from my current South Buffalo home. In an October 14th report under the eye-catching headline, “Trump supporter defends noose on his Seneca-Babcock lawn,” Western New Yorkers learned of an angry and unhappy man who erected a noose and gallows in his front yard in front of a Trump campaign sign and under a “#TRUMP MAFIA” banner.

A number of local politicians characterized the display as “clearly a racist symbol meant to invoke painful memories of lynching that have scarred the country for centuries.” In response to the criticism, the disgruntled resident insisted to the Buffalo News reporter that the noose display was not meant as a statement of racism, and that he was not a racist. Nonetheless, Buffalo Common Council Member Ulysses O. Wingo, Sr., who represents the predominantly African-American Masten District, gave the following assessment: “He clearly is sending a message that he doesn’t value black lives. Who else got hung with nooses in America? He is clearly not valuing black lives.”

Fortunately, the noose has been taken down. The avid Trump supporter explained to the Buffalo news that he “came to realize during a Bible class on Sunday afternoon the noose’s historical association with the lynching of African-Americans.” Whether motivated by Bible-class enlightenment, or the harsh media spotlight, removal of an expression of speech that brings such pain to neighbors and the broader community is a positive step.

Sadly, the 2012 lawn sign in East Aurora, and the controversial Seneca-Babcock noose and gallows, are far from the only displays of racial animosity in “The City of Good Neighbors.” A house at the corner of Indian Church Road and Parkview Avenue – kitty-corner from the BEREA Church of God in Christ – has displayed a Confederate flag from its front porch most every day for the 15 months that I have lived in the neighborhood. Perhaps in solidarity with the disgruntled Seneca-Babcock resident, the display at the Indian Church Road home was ratcheted up a notch this past week, waving not one, but two Confederate flags – an official one, and a battlefield flag. [There’s a useful history and description of the various Confederate flags at Wikipedia.] 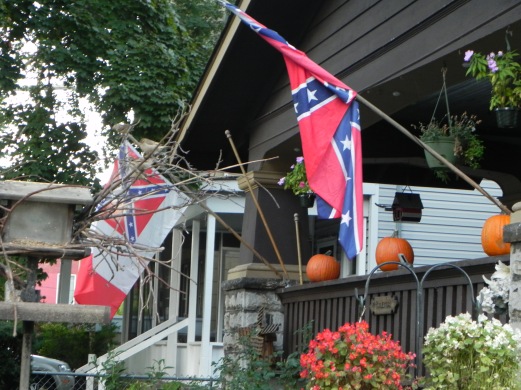 It is time for a break from these dreadful “teachable moments.”  I’m looking forward to Prof. Stacey Sutton’s learnable 90-minute discussion Wednesday evening at the Moot Senior Center.

P.S.  The flag display at the northwest corner of Indian Church Rd. and Parkview Ave. in South Buffalo changed on or about October 19th from two versions of the Confederate flag to the following dual symbols of racial intolerance:  trump-confederate-flags

Voices of Neighbors must be heard prior to selling former Buffum St. school

UPDATE:  Much has happened since I posted the following piece.  If this topic is of interest to you, I urge you to read two subsequent postings: https://withallduerespectblog.com/2018/10/15/cant-trust-city-hall-chris-scanlon-to-protect-the-buffum-street-neighborhood/ and https://withallduerespectblog.com/2018/06/11/councilmember-christopher-scanlon-serves-his-political-contributors-ignores-concerns-of-south-buffalo-residents/.

Buffalo’s Common Council – and, in particular, South District Councilmember Chris Scanlon – should not approve the sale of former School No. 70 on Buffum St. to an affiliate of Carl Paladino’s Ellicott Development company without first hearing from nearby residents in this quiet South Buffalo neighborhood – whether or not Mayor Byron Brown’s administration considers the leasing of the closed school property to an existing charter school as an appropriate use.

My home is less than two blocks from Buffum Street – a well-kept and attractive residential street in the Cazenovia Park section of South Buffalo running three or four blocks between Seneca Street and Fields Ave.  I walk the length of Buffum virtually every day, so I’m very familiar with the lack of traffic on the street, and the presence of two historic gems, the Seneca Indian Park at its eastern end: 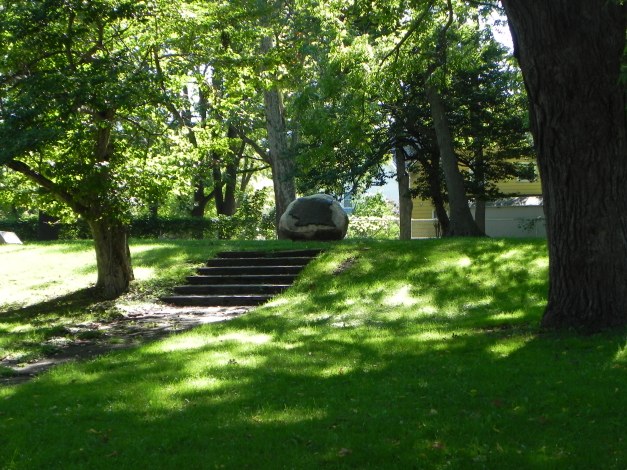 I also am well aware of the presence of the former School No. 70 property on the north side of Buffum: 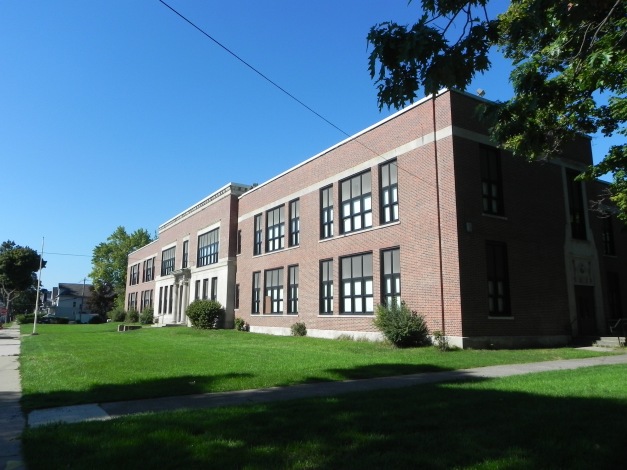 Built in 1915, and, from all outward appearances, in excellent condition, the former elementary school is situated across the narrow street and four or five houses west of the Seneca Indian Park, and several houses east and across the street from the historic 83 Buffum St. site:

From time to time, I’ve chatted with Buffum Street-area residents about the former elementary school, marveled about the size and beauty of the site, and wondered about its future.  None of the neighbors wished to see the century-old structure sit idle, but all were concerned about an incompatible use: 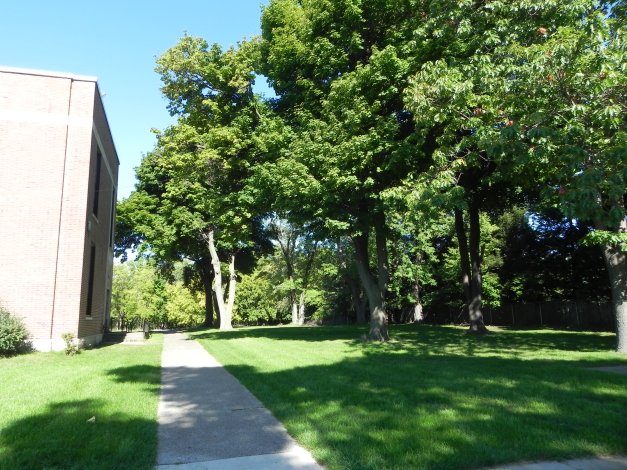 To my surprise, while checking the City Common Council’s October 4, 2016 agenda (on the afternoon of Oct. 3rd), I discovered the following entry:

I bicycled down Buffum St. after dinner on the 3rd, and, not surprisingly, discovered that the vast majority of neighbors were unaware of the imminent sale of the property to the Ellicott Development affiliate, or the fact that the papers filed with the Common Council offer the following information:

(1) The developer intends to lease the property to “an existing [unspecified] charter school.”  [Note:  The Maritime Charter School, which includes a high school, has been mentioned as a entity in search of a new home.]

(2) Ellicott Development’s plans include construction of a 45,000-square-foot building (including a gymnasium) and an athletic field.

(3) The developer’s “environmental assessment form” fails to mention the proximity of the school property to the Seneca Indian Park, and proclaims that the proposed action would NOT result in “a substantial increase in traffic above present levels.”

The submissions to the Common Council, apparently prepared by the City’s Department of Real Estate in conjunction with the Mayor’s Office of Strategic Planning, also contain the following disturbing statement:  “Pursuant to City Code Chapter 168-5.B(8) the City of Buffalo’s review ordinance exempts the sale of City property, under 50 acres, from SEQR [State Environmental Review Act] review by designating it a Type 2 Action.”

In my opinion, excluding the sale of all city property under 50 acres in size from the scrutiny and public participation intended by SEQR – which defines “environment” broadly to include the existing neighborhood character and traffic levels – violates the intent and requirements of the State environmental review law.  As such, the exemption is unlawful.  The City of Buffalo’s environmental review ordinance may not provide its residents with less protection than is envisioned by the State’s regulations, which do NOT exclude such significant land dispositions from environmental review.  Also, separating the step of selling the land from the project sponsor’s proposed use of the property constitutes “segmentation” of an action, unlawful under SEQRA.

The neighbors surrounding the former School No. 70 site deserve better from their public officials! 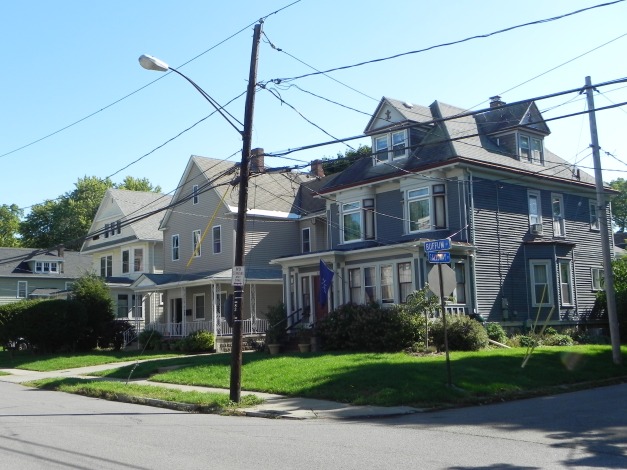 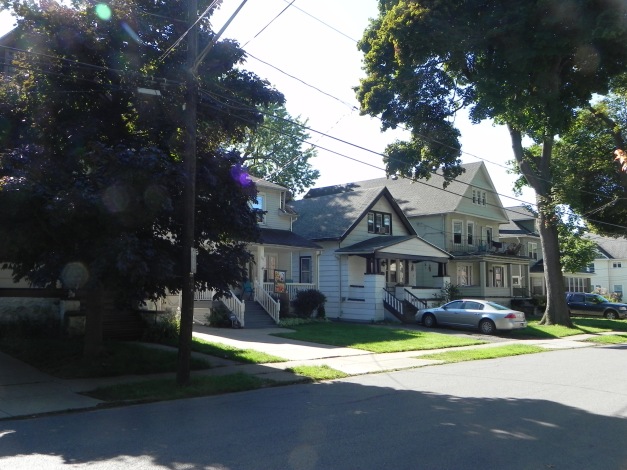 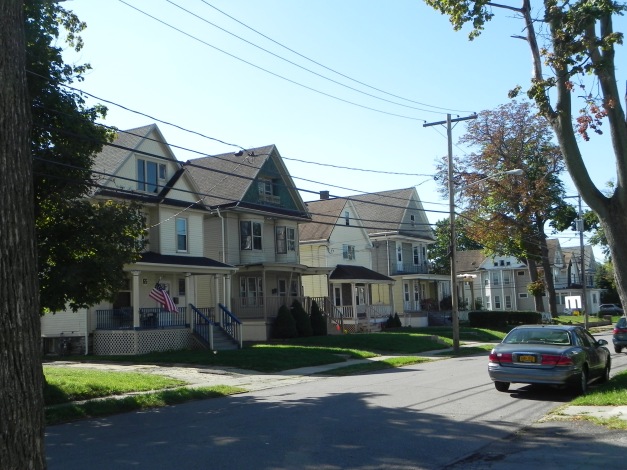 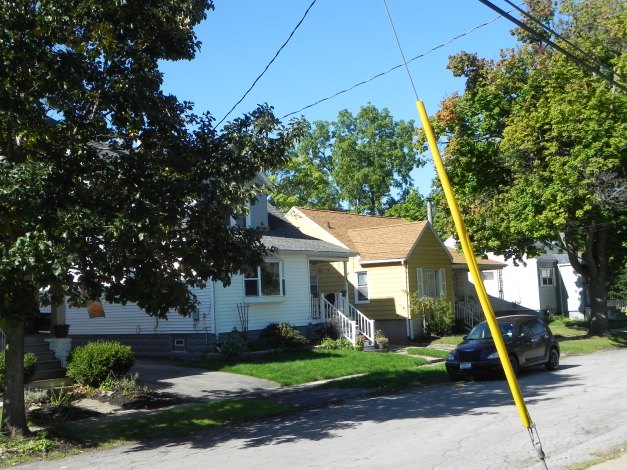 I urge the Common Council to refrain from taking any steps to approve the sale of this significant public asset until the voices of the surrounding neighborhood can be heard.