For What It’s Worth – Young people, once again, speaking their minds

Posted by Arthur J. Giacalone on March 30, 2018
Posted in: Uncategorized. Leave a comment

Listening to the passionate and articulate voices of WNY’s youthful speakers at the March 24, 2018 “March for Our Lives” rally at Buffalo City Hall was inspiring. Realizing that similar gatherings were occurring across our nation and around the world filled me with a sense of optimism in the future of our divided country, and a feeling of confidence that the generation that is currently coming of age will indeed compel the changes that their parents and grandparents have been unable – or unwilling – to make.

Something else occurred at the downtown Buffalo rally. I found myself singing along with – and proudly remembering the words to – a song embraced by the youthful opponents to the Viet Nam war during the late 1960s: Buffalo Springfield’s “For What It’s Worth.”  Stephen Stills’ lyrics, written more than a half-century ago, still resonated in my heart and mind. And they embodied, for me, a tangible connection between the protestors of that earlier era, and the energy and fierce resolve of today’s students who are demanding “timely passage of legislation to effectively address the gun violence issues that are rampant in our country.”

I was 17-years-old and a high school senior in February 1967 when the Canadian-American folk rock group (which, in addition to Stills, included Neil Young and Richie Furay) released “For What It’s Worth.” The USA was experiencing social upheaval on a variety of fronts with demonstrators taking to the streets and college campuses to express outrage over civil rights injustices and the Viet Nam war. I was still living in the protective cocoon of my parents’ working-class home, not quite ready to march in solidarity with those enraged by what they saw.

In contrast to the high school and middle-school activists who organized and participated in the March For Our Lives event on March 24th, my overt expression of outrage did not occur until my college days. The best that I could do in early 1967 was immerse myself in the raw emotions reflected in the music and lyrics to Stephen Stills’ protest song:

For What It’s Worth

There’s something happening here.  What it is ain’t exactly clear.  There’s a man with a gun over there.  Telling me I got to beware.  I think it’s time we stop, children, what’s that sound Everybody look what’s going down

There’s battle lines being drawn. Nobody’s right if everybody’s wrong. Young people speaking their minds. Getting so much resistance from behind. It’s time we stop, hey, what’s that sound Everybody look what’s going down

What a field-day for the heat. A thousand people in the street. Singing songs and carrying signs. Mostly say, hooray for our side. It’s s time we stop, hey, what’s that sound Everybody look what’s going down’

Paranoia strikes deep. Into your life it will creep. It starts when you’re always afraid .You step out of line, the man come and take you away. We better stop, hey, what’s that sound Everybody look what’s going down.

© Warner/Chappell Music, Inc. For non-commercial use only.

[As an aside, Rolling Stone magazine places Buffalo Springfield’s “For What It’s Worth” No. 63 on its “definitive list of the 500 greatest songs of all time,” right behind the Beatles’ “She Loves You,” and one ahead of Bo Diddley’s eponymous single “Bo Diddley.”]

The hopeful images of “young people speaking their minds,” and “a thousand people in the streets, singing songs and carrying signs,” are tempered by the knowledge that “paranoia runs deep” in our society, and, indeed, “there is a man over there telling me (and, you) we’ve got to beware.” 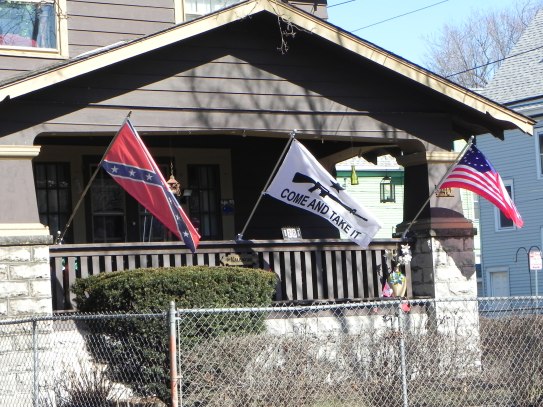 But, I am optimistic that the generation coming of age – including my son, a 17-year-old high school senior, and daughter, a 20-year-old college student – will succeed in the battle to end gun violence and heal our divided nation.

With All Due Respect (and, admiration),

P.S.  Here is the March For Our Lives “Mission Statement.”