“SHOCKING.”  That’s how the Buffalo News’ editorial staff describes the news of a secret plan initiated in the summer of 2012 by a small group of Washington, D.C. officials to redirect truck traffic from the Peace Bridge to the Lewiston-Queenston Bridge.  [Click here for the Jan. 29, 2014 Editorial.]  [Click here for Jerry Zremski’s Jan. 26, 2014 article.]

“UP IN ARMS.”  That, according to the Buffalo News opinion piece, is a proper response by state officials who were unaware of “this secret operation.”

The recent article IS shocking – and there certainly IS reason for anger.  But, with all due respect to the advocates of Peace Bridge expansion, these emotions would be more appropriately directed at the persistent failure of the Peace Bridge Authority [PBA], State of New York, and federal government to honestly and effectively deal with a grave environmental injustice:  the exorbitantly high rates of childhood and adult asthma suffered by residents of Buffalo’s Lower West Side as a result of Peace Bridge truck traffic.

State and federal authorities have been aware for years of the connection between commercial truck traffic at the international crossing and poor air quality in the surrounding neighborhood.  Back in 2007 when a “signature bridge” was the PBA’s goal, a Draft Environmental Impact Statement [DEIS] prepared on behalf of the PBA, NYS Department of Transportation, and the Federal Highway Administration [FHWA] included the following explanation why “no action” (doing nothing to improve capacity at the Peace Bridge) would not be an acceptable option:

Not surprisingly, this reference to “air quality concerns” was not included in the main text of the DEIS – the portion most likely to be read by officials, the media, or the public – but was buried way back in “Appendix S.”  [Click here for the pertinent excerpts from DEIS Appendix S & A.]

Additionally, “Appendix A” of the 2007 DEIS provided the following description of the toxic impacts of diesel exhaust on human health: 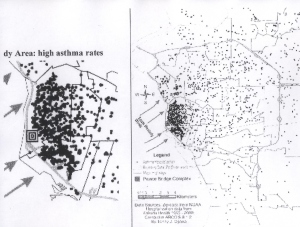 ** Note:  Copyright restrictions prevent me from using a chilling visual statement by Adam Zyglis, the Buffalo News political cartoonist, which appeared in the newspaper’s June 9, 2013 edition.  Mr. Zyglis eerily captured the high “toll” nearby residents involuntarily pay as a result of vehicle exhaust from bridge traffic.  In the midst of thick plumes of exhaust fumes, a sign at a toll booth reads:  “PEACE BRIDGE TOLLS – Cars… $3; Buses… $11; Trucks… $6-53; WEST SIDE RESIDENTS… ASTHMA.” **

Despite the 2007 DEIS’ acknowledgement of the harmful effects of truck exhaust on nearby residents, the same environmental impact statement chose to ignore the pleas of Jamson Lwebuga-Mukasa, PhD, MD, an esteemed expert in lung disease and asthma research and member of SUNY at Buffalo’s School of Medicine and Biomedical Sciences faculty.  Dr. Lwebuga-Mukasa’s recommendation to the PBA, NYSDOT and FHWA to direct truck traffic away from the Peace Bridge for the sake of public health was disregarded simply because his research was performed “independent of the Project Consultant Team”:

“…There was also a presentation given at [a workshop held in 2002] by Dr. Jamson Lwebuga-Mukasa, a local public health research scientist.  …  Dr. Mukasa presented research which he believes shows that heavy traffic at the Peace Bridge is linked to poor respiratory health of the west side of Buffalo and the surrounding community.  Dr. Mukasa suggested that public health would be protected by providing additional cross border capacity at another location and to not allow trucks to cross at the Peace Bridge.  The Project Consultant Team has not endorsed Dr. Mukasa’s conclusions since his research is independent of the Project Consultant Team.”

** Note:  The DEIS author’s excuse for merely swatting away Dr. Lwebuga-Mukasa’s research and recommendations flies in the face of a primary purpose for the environmental review process under SEQRA [NY State Environmental Quality Review Act].  In a landmark 1986 decision in Jackson v. NYS Urban Development Corp., 67 NY2d 400, New York’s highest court characterized the SEQRA review process as “a cooperative venture” whereby the government agencies have “the benefit of public comment” before issuing a Final EIS and approving a proposed action. **

Ron Rienas, PBA general manager, is one of the Peace Bridge expansion supporters identified in recent Buffalo News articles critical of the secrecy of the efforts to consider removal of truck traffic from the international crossing.  In 2007, Mr. Rienas was one of four officials to sign the DEIS prior to its release to the public for comments.  [Click here to see DEIS text excerpt.]  I won’t venture a guess as to whether the PBA general manager got as far into the voluminous document as “Appendix A” or “Appendix S” before he signed off on it.  But as a signatory, he should be accountable to the public for the information contained in it, including the description of the harmful effects of diesel exhaust on humans.

Unfortunately, the public comments of Mr. Rienas do not reference the negative impacts of truck traffic on Lower West Side residents.  To the contrary, the PBA general manager is continuing the shameful legacy of minimizing the research and conclusions of health experts such as Dr. Lweguga-Mukasa and other scientists.  According to  the January 29th Buffalo News editorial, Mr. Rienas characterized the research relied upon by the clandestine operatives as “woefully out of date.”

The Buffalo News editorial staff apparently did not bother to question the accuracy of Mr. Rienas’ disparaging description of the crucial research.  With a little effort, the Buffalo News and Mr. Rienas would have found a 2011 report, Air Toxics Exposure from Vehicle Emissions at a U.S. Border Crossing:  Buffalo Peace Bridge Study, detailing a timely research project conducted by Dr. John Spengler of the Department of Environmental Health, Harvard School of Public Health, and colleagues including Dr. Lwebuga-Mukasa.  I urge them to read it.

Mr. Rienas is busy these days explaining why the PBA and other agencies fully comply with their legal obligations when they look separately at the potential adverse impacts of the various projects underway or soon to begin in and around the Peace Bridge.  The official who made the decision in August 2012 to stop the discussion of plans to redirect traffic from the Peace Bridge to the Lewiston-Queenston Bridge, Denise Pease, Regional Administrator of the U.S. General Services Administration, is engaged in the same activity.  In a February 1, 2014 letter-to-the-editor, Ms. Pease assures all of us that the GSA “carefully follow[ed] the law.”  [Click here for Denise Pease’s letter.]

The PBA general manager and GSA administrator are engaged in a process that started decades ago.  In a 2000 decision involving the Peace Bridge, the Hon. Eugene M. Fahey, a notable WNY jurist, described the agencies’ endless excuses for not objectively assessing and mitigating the cumulative impacts of Peace Bridge expansion plans as “strategems to avoid the required environmental review.”  [See City of Buffalo v. NYS Dept. Of Environmental Conservation, 184 Misc.2d 243, 707 NYS2d 606 (Sup. Ct. Erie Co.).]  Justice Fahey ordered the PBA to do an environmental review that examined the Peace Bridge’s “cumulative impacts.”  However, the PBA, FHWA, and NYSDOT eventually abandoned the review, as well as a proposed new bridge, prior to issuing a Final Environmental Impact Statement reflecting the “cumulative impacts” of the multiple “capacity improvement” projects under consideration.

The clever tricks and schemes to circumvent meaningful examination of the health implications of Peace Bridge truck traffic continue.  Regretfully, none of the expansion-plan advocates appears willing to face, or even acknowledge, the “environmental injustice” the secretive group in Washington, D.C., was trying to address.  The Buffalo’s Lower West Side is unquestionably a community with a high percentage of low-income and minority residents experiencing a disproportionate share of adverse environmental impacts as a result of its proximity to the Peace Bridge.

Don’t Truck Up Our Neighborhood!

And the PBA, GSA, FHWA, and NYSDOT are unwilling to admit that THEY DO POSSESS THE AUTHORITY, under the existing environmental review laws, to conduct a thorough and objective comprehensive review addressing and mitigating the human health implications of Peace Bridge traffic – whether or not they are actually mandated to do so.  But their priorities are such that they refuse to recognize and take steps to eliminate the human suffering that results from commercial truck traffic.

That is what is truly SHOCKING.  That is reason for the entire Western New York community to be UP-IN-ARMS!