Congressman Brian Higgins is ranked No. 1 in the Buffalo Business First list of the 250 “most influential” people who both live and work in Western New York.  In the opinion of the local business publication, the Buffalo Democrat “wield(s) the most clout” of any man or woman in our eight-county region.  As described in a headline at WBFO-FM, “Higgins tops list of region’s movers and shakers.” There can little doubt that Rep. Higgins has great influence throughout the WNY area.  Tragically, for the residents of Buffalo’s Lower West Side, he has used his clout to frustrate any attempt to meaningfully reduce the adverse impacts of diesel fumes and other toxins on the health of the thousands of children and adults living in close proximity to the Peace Bridge.

For example, in June 2012, Buffalo Mayor Byron Brown sought to slow down the Peace Bridge Authority’s plans to demolish a block of houses on Busti Avenue to make way for expansion of the U.S. plaza. 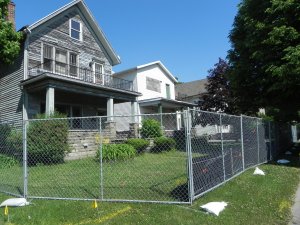 The Mayor’s somewhat surprising action occurred following a meeting with community representatives.  After that conference, a noted public health research scientist, Dr. Jamson Lwebuga-Mukasa, PhD, MD, wrote a letter to the Mayor which included the following description of the health impacts of Peace Bridge truck fumes on the lives of nearby children:

… I will now talk about children’s health. Sick children cannot concentrate on their school work. A child who has stayed up all night, or in an emergency room and/or hospital, because of asthma, sinusitis, ear ache, cough or nasal congestion, watery eyes, he/she and the parents are not be able to attend school or go to work. This contributes to poor school attendance, school achievement and high health care costs. Parents have to stay at home or leave work to care for their children. This will contribute to a permanent underclass that will last for the next 50 to 100 years. In the meantime, an organization will make profits from tolls and shops at the ever enlarging parking lot. The City of Buffalo will provide services for water, sewers, connecting roads and truck traffic will clog side streets. The number of jobs coming to Western New York will be low paying and often short-lived. Most likely the workers will not even come from the affected community. Workers at the toll booths are exposed to truck pollution and develop chronic illnesses that will increase as traffic increases. Because pollutants are distributed to other organs in the body, people do not associate their illnesses with traffic pollution. The diseases include: heart attacks, stroke, certain cancers and other inflammatory conditions. In many cases, such illnesses will be paid for by taxpayers. Parking lot owners keep the profits…

Mayor Brown cited the nearby community’s “valid concerns” and the existence of “many unanswered questions” when asking the Peace Bridge Authority and Gov. Andrew Cuomo to delay demolition.  According to the Buffalo News, Mr. Higgins “expressed great displeasure with the latest Peace Bridge delays.”  Although the Congressman noted that he understood concerns about a new Peace Bridge plaza and increased truck traffic on any new span, ”Higgins went on to state that it’s important to keep the focus on the BIGGER PICTURE”: 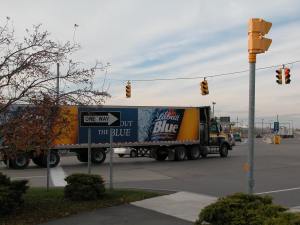 More recently, Rep. Higgins weighed in on reports that discussions had taken place among a group of officials in Washington, D.C., during July and August 2012, concerning the possibility of moving Peace Bridge truck traffic to the Lewiston-Queenston Bridge to address the high rates of childhood asthma in the adjacent residential neighborhood.  According to the Buffalo News, the Congressman was shocked by the story – not because efforts to ameliorate a clear environmental injustice had been scuttled, but because he and other WNY officials were not part of the conversation.  Rep. Higgins downplayed the adverse health impacts of the various plaza expansion projects now underway at the Peace Bridge:

… Higgins also defended the environmental impact of the various projects planned for the Peace Bridge, which not only include the customs house and new access ramps, but also a plan to be implemented soon that will pre-clear cargo traffic on the Fort Erie, Ont., side of the bridge. Also, Higgins and Sen. Charles E. Schumer, D-N.Y., are fighting to increase the number of customs agents at the bridge in order to cut down on wait times there…  Higgins said that all of those efforts aim to reduce the amount of time that diesel trucks spend idling at the bridge – and it’s the fumes from idling trucks that can create asthma problems.  “The real solution to the problem is in front of us, and that is to build in more capacity,” he said.

I, for one, find the words expressed by Dr. Lwega-Mukasa in his above-mentioned letter to Mayor Byron Brown considerably more persuasive than the utterances of WNY’s “most influential person”:

…  After a transient decrease in traffic congestion at the bridge, traffic volume will increase as truckers take advantage of decreased congestion at the bridge and the US Customs Control booths. Increased truck volume will trigger a new round of congestion and a requirement for parking lot enlargement paid for by the tax payers. The proposed plan does not address increased pollution from diesel trucks accelerating out of the plaza or idling at the duty-free shop parking lot. The new round of congestion and increased pollution will require still more expansion of the parking lot deep into the community, which will increase illnesses associated with truck pollution exposure. This will results in still further widening of the parking lot and pollution due to additional traffic…

Now is the time for Brian Higgins to use his impressive clout to protect the health of the men, women and children who live under the poisonous cloud created by Peace Bridge traffic.  His refusal – year after year – to take effective steps to end this environmental justice travesty is a disservice to the eight-county region he calls home.  And, a disgrace.

Brian, for the sake of the children, see the true “big picture.” 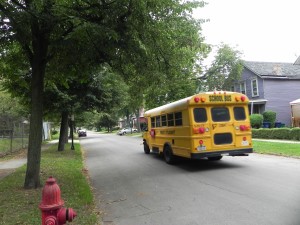 With all due respect,

P.S.  I look forward to the day when community activists, such as the Lower West Side crusaders Kathy Mecca and Liz Martina, are recognized by the local media as belonging on a list of WNY’s “most influential” residents.  In the long run, they will be acknowledged as having been on the correct side of history (if not, we’re all in deep trouble).

Note:  A shorter version of this post was published on February 15, 2014 in the “Another Voice” column of The Buffalo News: http://www.buffalonews.com/opinion/another-voice/another-voice-higgins-should-use-his-clout-to-protect-residents-near-the-peace-bridge-20140214