[A version of this post can be found in the July 18, 2018 print version of The Public,  and online under the title:  With All Due Respect: Reflections on the Buffalo Billion Verdict.  My thanks to the editor-in-chief of that fine publication, Geoff Kelly.]

As a citizen, I wish that the convictions handed down on July 12, 2018 in the Southern District of New York’s federal court shocked me.  They didn’t.  I’ve seen too much during the 29 years that I’ve been an observer of development-related government decision-making.

Zoning, land use and construction decisions are made at what I view as the intersection of politics and greed.  It’s an unattractive and discouraging place to be if you believe that citizens deserve both an open and fair process, and government officials who truly strive to function lawfully and in a manner intended to benefit society as a whole.

I feel saddened, not vindicated, by the convictions.  What is most troubling is a realization that the Lou Ciminelli’s of this world – and the compliant government officials with whom they interact – may truly believe that they’ve done nothing wrong.  After all, that’s how the system has always worked.

I have no profound recommendations.  There are no magic wands to wave.  We must intelligently exercise our right to vote, and select honest and courageous representatives.  But we human beings are flawed.  Self-interest – whether it’s the developers greed, or the politicians desire for power – will always be a motivating force when choices are being made.

One thing is certain.  The problem of corruption will not go away as long as publications such as the Buffalo News continue to express opinions like the one made in its July 14, 2018 editorial, “Corruption reigns”:  “But it is important to draw a distinction between valuable economic development and the corruption that may come to play.”

I beg to differ.  Whether we’re talking about decisions being made in Albany by the Cuomo administration, or in Buffalo under the auspices of Mayor Byron Brown and our very common Common Council, the ends do not justify the means.

The integrity of the decision-making process – the how and why decisions are being made – is of equal, if not greater, importance than the outcomes of those determinations.

Here’s a few other thoughts I have (some, admittedly, may be of greater significance than others) relating to the Buffalo Billion verdict.

The real world has finally caught up with my computer’s spell-checker.

I had noticed years ago that whenever I used the word “Ciminelli” in a document, the ubiquitous wavy-red line showed up under this well-known Buffalo family name.  To my amusement, the first spell-check suggestion was always “criminally.”

Now the proffered spelling option seems like more than just a quirky coincidence.  There actually is an official, tangible connection between Ciminelli and illegal, unlawful or illegitimate activity.

News of the conspiracy and wire fraud convictions has not only been splashed across the front page of the Buffalo News. Thanks to the elephant-in-the-room throughout the month-long trial – Andrew Cuomo (whose conduct has raised eyebrows long before the Buffalo Billion controversies, see, for example, this and that) interest in the story has far exceeded the boundaries of Mr. Ciminelli’s hometown.

Not surprisingly, the New York Times focused its headline on Alain E. Kaloyeros, the former president of SUNY Polytechnic Institute –  “Architect of Cuomo’s Buffalo Billion Project Is Convicted in Bid-Rigging Scheme.”  But its readers did not have to wade too far into the article to find reference to the conspiracy and wire fraud convictions of “Louis Ciminelli of LPCiminelli.”

So a good chunk of the world now knows what spell-check has been presciently alluding to for quite some time.

It didn’t take long for a slew of rather predictable reactions to materialize on-line and in the media in response to the July 12th convictions.  Here’s a sampling of headlines:

** “Cuomo distances himself from disgraced pal after conviction.”

What caught my eye were the words of Paul Shechtman, Louis P. Ciminelli’s attorney.

While we may have crossed paths in Cambridge, Ma. in the mid-1970s while attending Harvard Law School, I don’t know Mr. Shechtman,   He certainly has had an impressive legal career.  And his political connections run deep, including appointments by former NY Governor Pataki as chair of New York State’s Ethics Commission and Commission on Lobbying.

So Paul Shechtman’s words in the July 13th Buffalo News, under a black banner and the words “BUFFALO BILLION:  THE VERDICT,” strike a chord:

“I have never been more deeply disappointed in my professional life. I don’t think there was any evidence against Lou Ciminelli.  The fact that 12 people saw it differently renders me speechless.”

Lou Ciminelli’s high-priced New York City attorney appears to be feeling the same way that I have felt all-too-often while representing common folk in Western New York who dare to question the wisdom of a proposed development project.  I have repeatedly experienced deep disappointment in my chosen career  Whether it was a city or town’s legislative body, a highly respected member of Congress, my own city councilmember, or a state Supreme Court judge.  I have found it difficult to fathom how government officials could honestly view things so differently than my clients and I.

Reporting on the Buffalo Billion verdict did provide one good laugh, thanks to the absurdity of the words attributed to Carl Paladino, Buffalo businessman and unsuccessful gubernatorial:

“A longtime critic of both Ciminelli and Cuomo praised the jury’s verdicts.

‘We’ve seen in Ciminelli’s case, greed took over in his life. You’d have to be a fool not to connect the dots back to Cuomo,’ said Buffalo businessman Carl Paladino, who unsuccessfully ran against Cuomo for governor in 2010. Paladino added that ‘there’s always going to be someone who wants to do a shortcut and develops a relationship with crooked politicians. This is just the tip of the iceberg for a guy like Cuomo.’

The hypocrisy – or self-deception – evident in dear Carl’s comment is mind-boggling.  As I posted more than four years ago – following a “New Urbanism” conference held in Buffalo – the relationship between Mr. Paladino and Mayor Brown is precisely why Buffalo’s residents should not expect any major change in the way local officials choose one project or neighborhood over another.

As part of the scheme, Dr. Kaloyeros and Mr. Howe tailored requests for proposals, or RFPs, to fit the specific qualifications possessed by the two companies — LPCiminelli, a Buffalo construction management firm, and COR Development, a Syracuse-area firm — and ensure that they be chosen by Fort Schuyler for the projects.

LPCiminelli, for example, received a contract to build what became a $750 million solar-panel plant on the banks of the Buffalo River, while COR received contracts worth more than $100 million for other projects. Both firms were clients of Mr. Howe’s.”

There are subtler ways than the Buffalo Billion bid-rigging scheme that political contributions and crony capitalism taint the decision-making process.

I’ve observed an unsettling correlation between major contributions to Andrew Cuomo, and receipt of an “environmental free pass” – that is, approval of major construction projects without the time and expense of an Environmental Impact Statement (which is the most effective tool the public has to influence development-related decisions).  The Jacobs family, the Pegulas, and Queen City Landing’s Gerry Buchheit, all appear to have benefited from this significant perq.

But the Solar City project is probably the most egregious example of this phenomenon.   LPCiminelli not only benefited from a rigged Request For Proposal process, the company was able to immediately put a shovel in the ground without first systematically analyzing and mitigating potential adverse environmental impacts.  The state agency granting the “free pass” was, no surprise here, Alain Kaloyeros’ SUNY Polytechnic Institute (known, at that time, as the College of Nanoscale Science).

And, by the way, Andrew Cuomo, in the midst of a re-election campaign, got to boast about a massive project actually underway in Western New York, rather than a mere development plan undergoing environmental review.

Lastly, there’s another example of what an objective observer might call “rigging” that occurs during the process of drafting zoning laws.  One need only look to the final stages of the City of Buffalo’s adoption of the “Green Code.”

Sounds great, but there is one major problem. 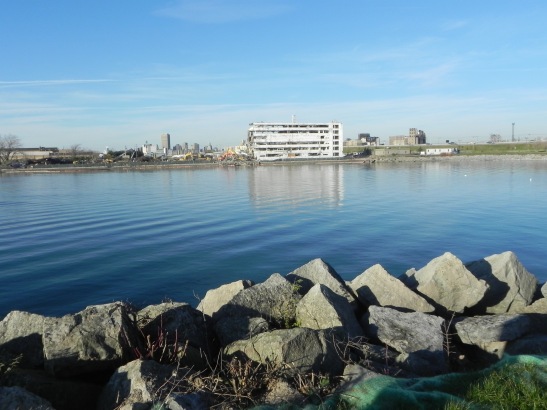 Historically, the Outer Harbor has been described as the Lake Erie shoreline from the U.S. Coast Guard Station at the northern end, extending southerly beyond Times Beach Nature Preserve, the Seaway Pier, the Terminal “A” and “B” complex, the former Freezer Queen site (now, the proposed location of Queen City Landing’s controversial 23-story tower), the Small Boat Harbor, the Gallagher Beach facilities, down to the Tifft Nature Preserve.

Efforts to get South District Councilmember Christopher Scanlon to explain this discrepancy have not been successful.