Guess what Gerry Buchheit has in common with Jeremy Jacobs Sr. and the Pegulas?

It may be a mere coincidence, but Gerald A. Buchheit, Jr. – the developer behind the 23-story tower proposed for the former Freezer Queen site – has something in common with billionaires Jeremy M. Jacobs, Sr. and Kim and Terry Pegula.  They all have given large donations to Governor Andrew Cuomo and all have received an environmental “free pass” for recent Buffalo projects.

The State Environmental Quality Review Act [SEQRA] presumes that a major development project may have a significant adverse impact on one or more aspect of the environment.  For that reason, SEQRA anticipates that a major project – referred to as a “Type I action” – will require preparation of a Draft Environmental Impact Statement [DEIS].  Fortunately for these campaign contributors, the City’s Planning Board and the Erie Canal Harbor Development Corp. [a state-created entity] fast-tracked the approval process for each developer’s recent project, and issued a “Negative Declaration.”  By doing so, the SEQRA process was abruptly ended, and, as a result, Mr. Jacobs, the Pegulas, and, now, Mr. Buchheit, were able to circumvent any meaningful environmental review or public scrutiny, as well as the expense and delay accompanying the DEIS process.

As I addressed in a September 2015 post in greater detail [see https://withallduerespectblog.com/2015/09/23/buffalos-billionaires-hailed-as-philanthropists-insist-on-profiting-at-the-publics-expense/], Mr. Jacobs made a $50,000 donation in June 2010 to Andrew Cuomo’s gubernatorial campaign (and, also contributed $11,250 to Mr. Cuomo in August 2014 during the Democratic primary skirmish between the incumbent Governor and challenger Zephyr Teachout).  In between the two political donations, the City Planning Board issued a Negative Declaration for the new headquarters of the Jacobs family’s Delaware North company – located at the corner of Chippewa Street and Delaware Avenue – eliminating the need for a DEIS.

New York State records show that in 2013 and 2014 Kim and Terry Pegula made personal contributions totaling $67,000 to Gov. Andrew Cuomo.  The Pegulas’ massive waterfront project – HarborCenter – was approved by the Cuomo-controlled ECHDC without the requirement of a DEIS.

Despite his apparent preference for the Republican Party and its candidates, Gerry Buchheit wrote a $25,000 check to Andrew Cuomo’s campaign fund in June 2015.  The prior year, he had made a post-primary donation of $5,000 to Gov. Cuomo’s running mate, Kathy Hochul.  [See Buchheit Donations.]  On May 31, 2016, the City Planning Board issued a Negative Declaration for Buchheit’s Queen City Landing project, concluding the environmental review process for the controversial Outer Harbor tower. 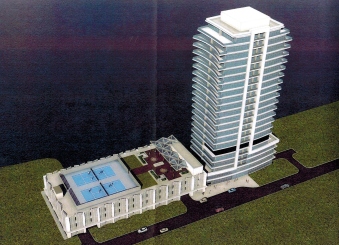 It has not yet occurred, but odds are awfully good that Mr. Buchheit will soon have something else in common with Buffalo’s billionaire developers – financial assistance for his project through the State’s Brownfield Cleanup Program.  The State Department of Environmental Conservation – which acquiesced to the City Planning Board’s request to make the SEQRA determinations for Buchheit’s Outer Harbor project – currently is reviewing Queen City Landing’s dual applications for brownfield assistance.

Plenty of coincidences around here.

4 comments on “Guess what Gerry Buchheit has in common with Jeremy Jacobs Sr. and the Pegulas?”