WGRZ reported on June 17th that South District Christopher Patrick Scanlon is leaning toward voting “yes” on the proposed 23-story Queen City Landing project at the former Freezer Queen site on the Outer Harbor. The upcoming decision – which could take place as early as June 22nd – will determine the face and character of Buffalo’s waterfront for generations.

Chris Scanlon has not provided me with any substantial feedback to the communications that I have been sending to him – as my South District legislator – and the entire nine-member Common Council the past few months (although I certainly have tried to constructively provide legal and factual analysis – here’s one example). So now I am sending this open letter to Council Member Scanlon with a series of questions I hope he will consider:

It has been five years since you were appointed to fill the South District Common Council seat vacated by State Assemblyman Mickey Kearns. I have little doubt that you are sincerely committed to work in the best interests of the residents in your district, including your wife and young son, and the City of Buffalo as whole. The decision you will make regarding the proposed Queen City Landing project will be a defining moment in your career. Before you cast your vote, I urge you to consider the following questions and comments:

First, what best symbolizes the legacy you wish to leave behind for the City of Buffalo, a sterile and controversial 23-story tower, or an Outer Harbor where nature thrives and city residents and visitors can get away from urban development and enjoy the beauty and serenity of the Lake Erie shoreline?

As you are well aware, two of your fellow Council members – David Francyk and David Rivera – have characterized the Queen City tower as too tall and aesthetically-challenged. Whether or not you agree with that assessment, a vote to allow this project to go forward will alter for generations the character and feel of the Outer Harbor. You must seriously consider what your vision is for Buffalo’s future, and act accordingly.

Second, who do you believe should be determining the future of Buffalo’s Outer Harbor, a private developer with a less-than-consistent track record, or the Common Council speaking on behalf of the entire city?

As Buffalo’s legislative body, you and your fellow Common Council members have a duty under the “Buffalo Coastal Special Review District” process to protect our city’s waterfront from the threat of “inconsistent development” or “inadequately controlled development.” Just this past February, the Common Council – including yourself – adopted the city’s official goals and policies for waterfront development, the Local Waterfront Revitalization Program [LWRP].

Does your vote for the LWRP mean anything? Can you truly reconcile the vision for Buffalo’s Outer Harbor embraced by the LWRP – with its goals of protecting the scenic quality of the coastal area; enhancing the enjoyment and appreciation of visitors to the Outer Harbor’s parks, marina, walkways and nature preserves; preserving and improving state- and locally-designated natural habitats; avoiding disruption of bird migration “to the maximum extent practicable”; and, reusing industrial heritage resources, such as the former Freezer Queen facility – with the plan proposed by Queen City Landing, LLC, and its principal, Gerald A. Buchheit, Jr.?

Mr. Buchheit’s history of proposing projects and then abandoning them may be unrivaled, even if you choose to disregard his “ambitious plan” in 2002 – when his casino development group, Northstar Development Corp., owned the Statler Towers – to convert the Convention Center and the first two floors of the Statler Towers to casino space, construct a parking tower, and develop an entertainment/restaurant/retail complex stretching along the block between Delaware Avenue and Franklin Street.

The Orchard Park businessman (who has generously contributed to the Republic party as well as Gov. Andrew Cuomo) has twice – in 2008 and again in 2015 – proposed to reuse the existing Freezer Queen building and construct a luxury condominium project. Here’s is how Buffalo Rising described Buchheit’s 2008 plans:

“Buchheit is a former owner of the Statler. He sold the property to Bashar Issa … He purchased the Freezer Queen property for $3 million at a November 2007 auction.  In March 2008, Buchheit announced plans to create as many as 130 condos in the building and additional residential buildings and a hotel on surrounding land.  Those plans (below) stalled out with a sputtering economy.” 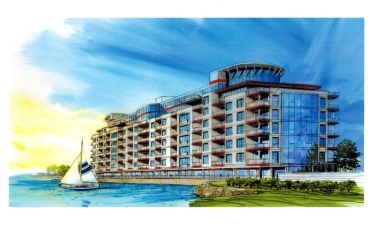 “A plan to convert the vacant Freezer Queen complex at the north end of the Small Boat Harbor is back with a new design.  Property owner Gerry Buchheit is partnering with R&P Oak Hill on the $40 million Queen City Landing project that will start with the conversion of the six-story building into 120 apartments priced at $2,000/month and up.  Future phases would include new residential buildings and possibly a hotel on the 20-acre site. The development team is working with Trautman Associates to design the project.  Plans call for retrofitting the existing building to create one and two-bedroom units ranging in size from 1,200 to 1,500 sq.ft. of living space. The main floor will house a mix of restaurant, bar, and fitness center tenants. The remaining floors will contain the residential units featuring floor-to-ceiling glass, high ceilings, and balconies. Plans also call for penthouse residences added atop the existing structure, and a resident club house with roof top terrace.  Covered parking is planned.”

In July 2015, the Buffalo Business Journal noted that “the existing 6 story building provides limitless views of the lake, downtown, and more” [so, I must ask, who needs a 23-story tower?]. It also provided the following priceless quotes from Gerry Buchheit:

“Now is the time,” Buchheit said Thursday while revealing his proposed plans at an event sponsored by Business First… “We envision this as a local hot spot,” Buchheit said. “This could be a regional example of a community can re-imagine its waterfront.”

As you know, Mr. Buchheit’s representatives obtained approvals from the City of Buffalo for both his 2008 and 2015 plans. Then each project was abandoned.

Note:  Mr. Buchheit now claims that he must demolish – and not reuse – the existing Freezer Queen building because the structure sits in a 100-year FEMA floodplain.  It was sitting in the same floodplain in 2008 and 2015.  Are we to believe, on the one hand, that Mr. Buchheit presented his 2008 and 2015 plans to the City of Buffalo without taking into consideration the hazards of building in a floodplain, or, on the other hand, that he is using the floodplain as an excuse so that he can build a 23-story monument to his ego?

As South District Council Member you must objectively ask: Is this is the person to whom one can confidently entrust the future of Buffalo’s Outer Harbor?

Third, are you able to identify any meaningful mitigation measures incorporated into the Queen City Landing project to reduce adverse aesthetic and environmental impacts?

“In a phone interview on Friday evening, Councilman Scanlon said he is leaning toward voting ‘yes’ on the project. ‘If you look at what the Planning Board was doing, as lead agency, in determining that it didn’t need a full Environmental Impact Statement… I think the Planning Board, in their role as lead agency, they didn’t feel it needed one based on everything they looked at,’ Scanlon said. ‘The issues that were raised, legitimate or non-legitimate, by the public or other people, I think they felt they were mitigated by the developer’s plans.’”

Frankly, I am unaware of any meaningful mitigation measures. Are you able to identify any of the supposed mitigation reflected in the developer’s plans?

Do you know what, if anything, was done to lessen the adverse aesthetic impact of viewing a 23-story, 324-foot building from the vantage point of boaters or restaurant patrons at the adjacent Small Boat Harbor, or from walkers at nearby Greenway Nature Trail or Tifft Nature Preserve?

What mitigation measures, if any, were taken to protect scenic coastal vistas?

Has the developer done anything to change the plans to ensure the safety and convenience of bikers and pedestrians using the public bike path who will be forced to deal with one vehicle entering or exiting the Queen City Landing driveway as often as once every 16 seconds (and, that is the intrusion across the bike path before Mr. Buchheit builds the additional 10-story apartment tower he plans for the rear of the parcel)?

Did the City Planning Board assess how a shorter building might be less disruptive to seasonal bird migration than the proposed 23-story tower?

What mitigation measures were added to ensure that the proposed 400,000-square-foot mixed-use development project – that will include a nightclub, restaurants, and other outdoor activities, and generate thousands of motor vehicles daily – will not adversely impact nearby fishing hot spots, fish spawning and bird nesting sites, and sensitive natural habitats? 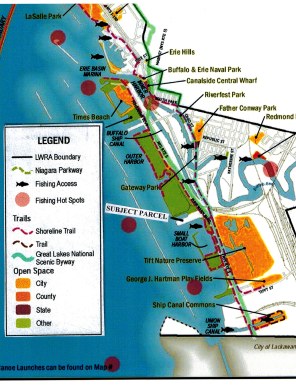 Did the developer incorporate the request by Congressman Brian Higgins to “eliminate the negative impacts associated with putting a parking garage (three stories high and 277 feet long) along the water’s edge”?

Lastly, do you agree with the absurd statement at page 4 of the City Planning Board’s Negative Declaration that the 324-foot structure will NOT negatively impact the Outer Harbor’s aesthetic resources and coastal views because it is “a stand-alone building”?

Fourth, are you allowing yourself to be swayed by pressure being placed on you and other Council Members by Mayor Byron Brown’s administration, other elected officials, the media, or business interests?

I keep hearing rumors – from every direction – that you and the other members of the Common Council are being pressured to say “Yes” to this project? Are the rumors true?

Can you assure residents of the South District and throughout the City of Buffalo that your vote for or against the project – or insistence that the building be substantially reduced – will be made based on the requirements of the city’s zoning code and impacts on the environment, and not as a result of political pressure?  Your legacy will depend on it!