A Buffalonian’s 2005 Walk through Christo’s The Gates

Hungarian-born artist, Christo, died on May 31, 2020.  Given the variety of societal challenges we’ve been facing, I’ve wavered on whether to share photographs that I took in Central Park in February 2005.  I didn’t want to appear too trivial.  But, my indecision ended yesterday.

The June 7, 2020 print version of the Buffalo News contains, in its GustoSunday section, an article that had first appeared in the New York Times entitled, “Christo’s billowy visions were fleeting but unforgettable.”  Included in the piece was a solitary black-and-white photo from “The Gates,” a project conceived by Christo and Jeanne-Claude, his wife, twenty-six years prior to its fruition.

I had traveled to New York City on February 22, 2005 to experience The Gates first-hand.  The massive undertaking would be in existence a “fleeting” 16 days.  [Here’s the “appraisal” of the work of art published in the New York Times the day after its opening, “A billowy gift to the city, in a saffron ribbon.”]  The shades-of-gray image of The Gates in Sunday’s newspaper struck me as a wholly inadequate way to recall the iconic vision of the recently-deceased artist.  As Anna Quindlen wrote for Newsweek in March 2005:

“Said to be saffron but really a Hare Krishna orange, ‘The Gates’ consisted of a line of giant croquet wickets [7,532 in all] edging the park paths as far as the eye could see, their cross-beams hung with a flutter of fabric that embraced the walkers beneath.”

So I dug up my 2005 photos and instantly realized, as I revisited that stroll 15 years ago, how refreshingly stunning Christo’s project was.  It lifted my spirits.  And, I concluded, may well be an appreciated source of pleasure for the visitors to this blog.

I’ll let the pictures tell their own story.  But, as a Buffalonian proud of our city’s Olmsted parks, I feel compelled to share this quote from The Gates’ official brochure:  “The 16 day duration work of art, free to all, is a memorable joyous experience for the people of New York, as a democratic expression that Olmsted invoked when he conceived a ‘central’ park.” 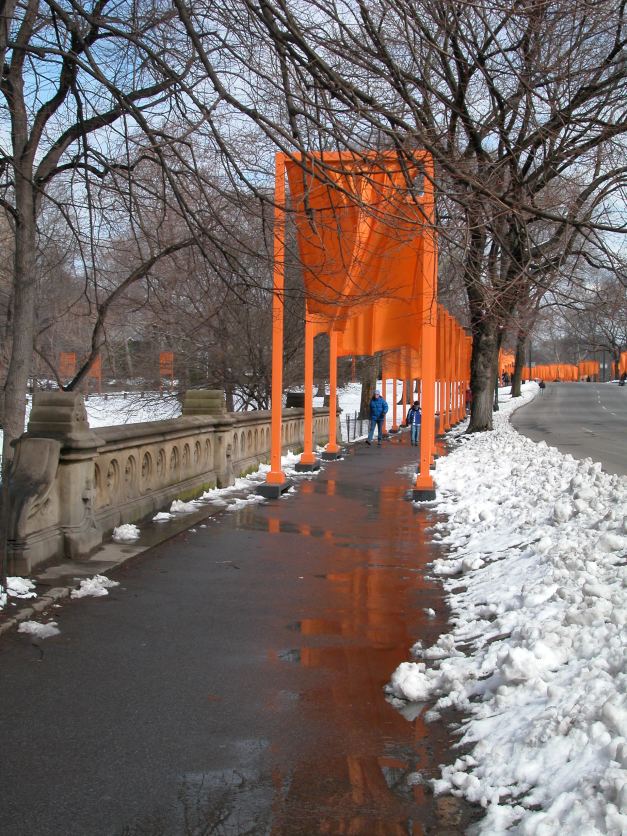 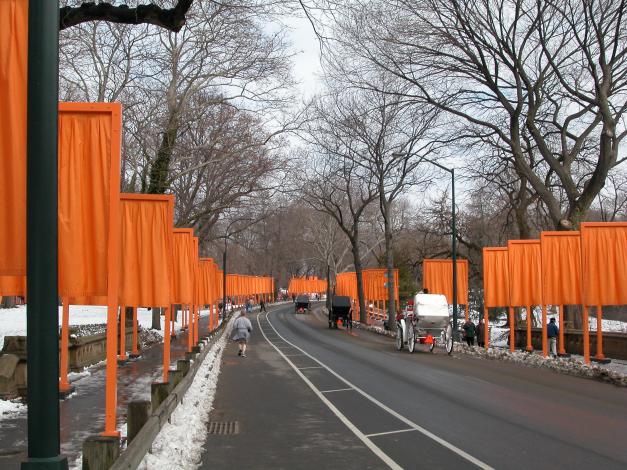 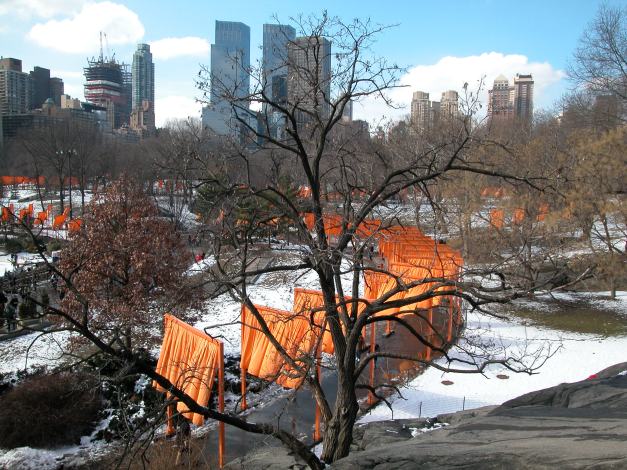 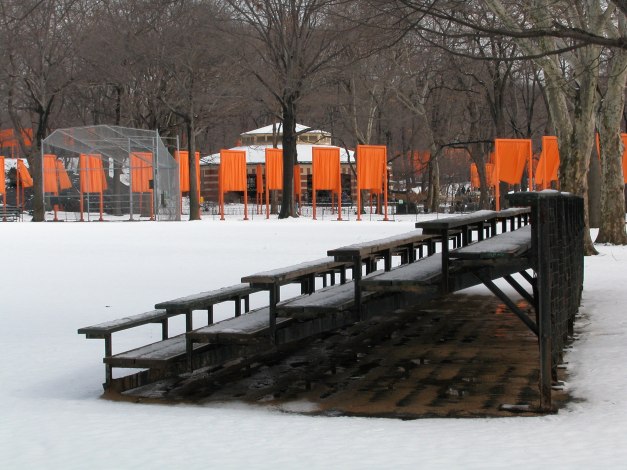 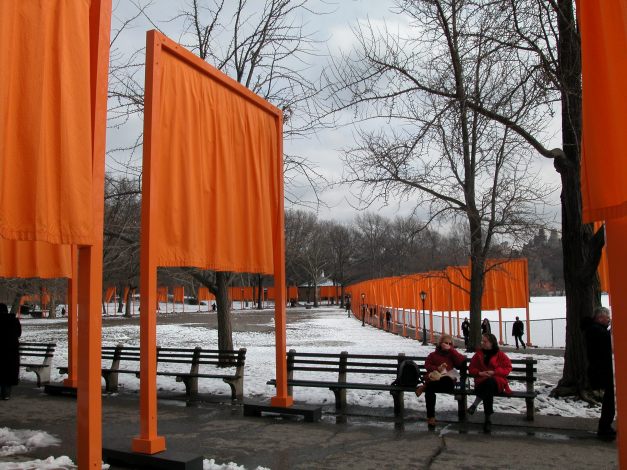 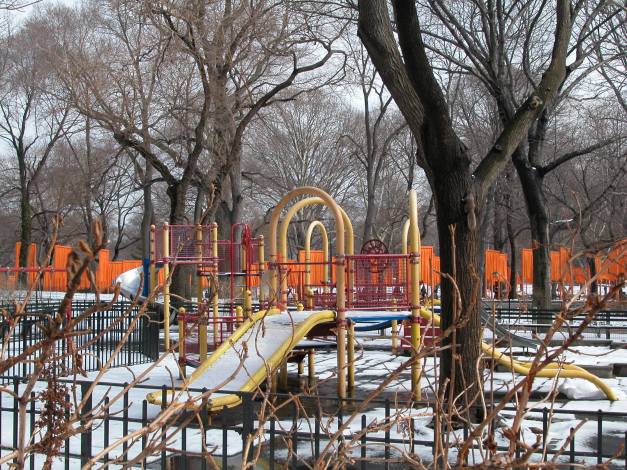 P.S.  Here are several pages from the official brochure:

In case you’d like at least a fighting chance to “read” the map, here it is split in two: 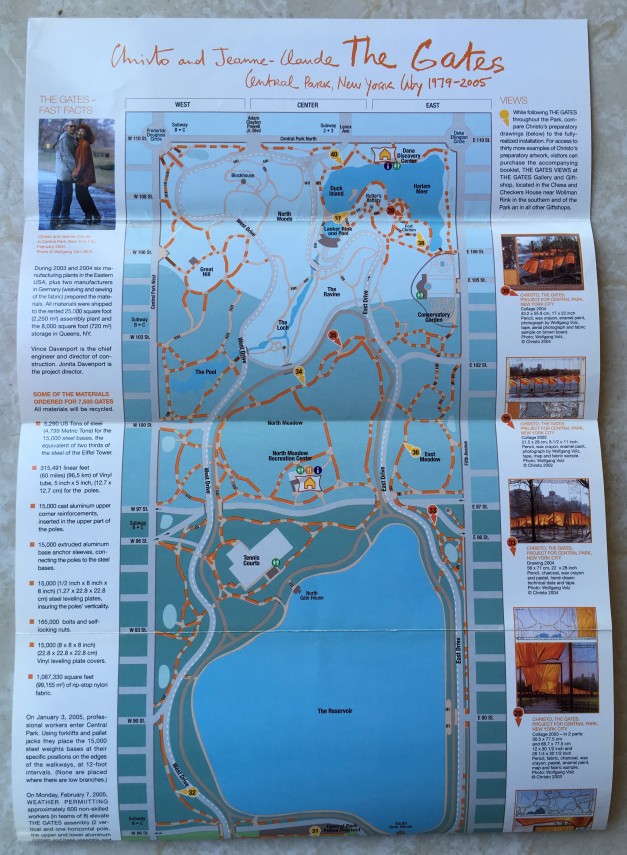 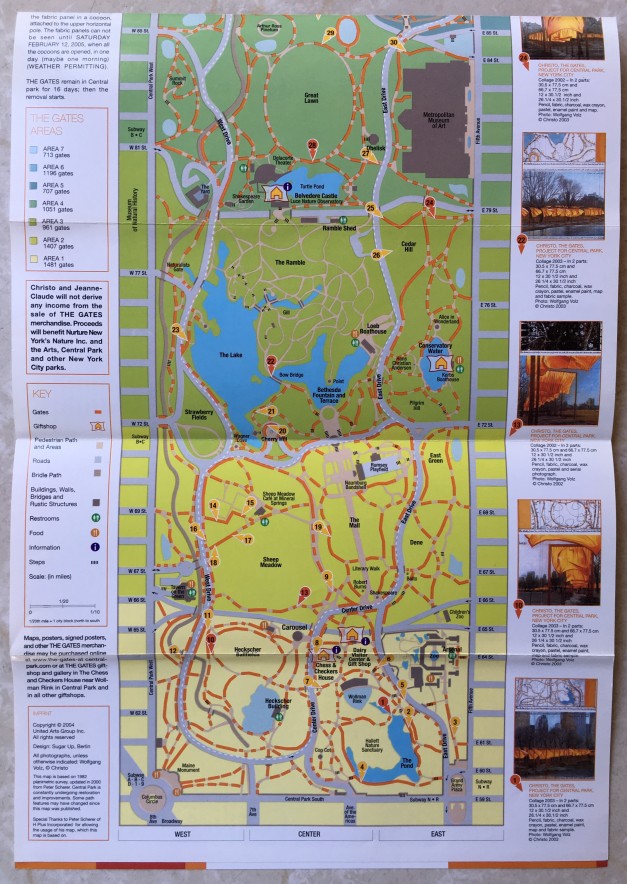