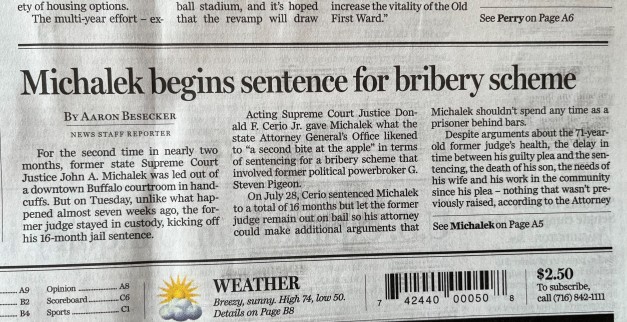 And, here’s the September 11, 2022 Buffalo News report on the State Attorney General’s displeasure at Michalek’s “second bite at the apple.”  Bottom line, despite the six-year delay in sentencing, Michalek’s efforts to be treated differently than other convicted felons – and totally avoid incarceration – have failed.]

[Note: It appears that the Buffalo News has chosen not to publish a piece that I submitted on August 2, 2022 for use in its “Another Voice” column.  I am posting that op-ed submission, with minor editing, below.]

Former State Supreme Court Justice John A. Michalek admits that he engaged in a bribery scheme from 2012 to 2014 with Steven Pigeon, former chair of the Erie County Democrats. The fallen jurist now claims that he was blinded by his “desperation” to keep a family member safe.

During that same time period, my clients and I painfully observed, and were repeatedly harmed by, Michalek’s desperate efforts to please yet another political operative, Dennis C. Vacco, a former statewide officeholder from the opposite end of the political spectrum.

I don’t claim to know what was motivating the former judge’s relentless actions to curry favor with Mr. Vacco.  In my prior appearances before Michalek (some winners, some losers), the judge was cordial and never showed palpable bias or animosity toward me or my clients. But in this particular proceeding, the now-disgraced jurist denied me the right to be heard on important legal issues, disregarded well-established legal principles in ruling in my adversary’s favor, applied two glaringly distinct standards when responding to the behavior of the lawyers appearing before him, felt compelled to insult and threaten me in open court, and engaged in communications with opposing counsel’s office without affording me an opportunity to be present.  [See Ltr to JMichalek 02-07-13 re ex parte communications; also see, more broadly, MICHALEK – 8 Examples to Share – written in May 2014.]

Michalek was so eager to embrace every assertion made by my opposing counsel – no matter how preposterous – that he didn’t blink an eye or respond when Mr. Vacco arrogantly proclaimed during oral argument, “There are 30 days in February, unless there’s some new calendar I’m not aware of.”

My attempts to bring Michalek’s erratic behavior to the attention of the judicial hierarchy went mostly unheeded:

– I twice asked the then-Administrative Judge for Western New York, Paula L. Feroleto, to schedule a conference with the parties and Michalek to discuss reassignment of the case to another judge. She declined, claiming the lack of authority to interfere with the case.

– Although the intermediate appellate court agreed that Michalek had abused his discretion when he concocted a legal theory – without any factual support – to preclude me from communicating with a non-party corporation, the appellate panel refused to reverse Michalek’s decision not to remove himself from the pending lawsuit. According to the now-disgraced jurist, “I have searched my conscience and I perceive no bias or prejudice against Mr. Giacalone or his clients, or in favor of the plaintiff or its counsel.”

Now the same judicial system that stood by while Michalek curried favor with one political operative, handles him with kid gloves when addressing his punishment for engaging in the bribery scheme with Pigeon: a six-year delay in sentencing; a sentence of one day less than a year for bribery; a decision not to send Michalek to a state prison; and, a mysterious post-sentencing delay in incarceration.

This is no way to regain the public’s trust.

Note: Mr. Giacalone has practiced law in NYS for 46 years, and writes about development law and the judiciary at his blog, WithAllDueRespectBlog.com.