UPDATE II:  With a headline proclaiming, “Teachout plans to use office in war on corruption,” the September 9, 2018 Sunday Buffalo News quotes from the Attorney General candidate’s prophetic 2014 opinion piece to demonstrate her “nose for corruption.”  Here’s the on-line version of the 09/09/18 article; and, here’s Zephyr’s 2014 “Another Voice” column.

UPDATE I:  I often disagree with the positions taken by the editorial board of the Buffalo News.  But, they got this one right, endorsing Zephyr Teachout for NYS Attorney General.  Click here.

[Full Disclosure:  I’m trying to approach the upcoming Democratic primary for New York State Attorney General objectively, but it is a bit of a struggle.  For one thing, I have known Zephyr Teachout since her 2014 campaign for NYS governor.  Her first fundraiser in 2014 west of the Hudson River took place around my kitchen table when I was living in East Aurora.  More importantly, my decades of litigating development and land use matters on behalf of residents has exposed me to the pervasive legal and political manipulation of the development process [for example], and reinforced my belief that government agencies and public officials – more than individual citizens or corporate entities – have an obligation to know, obey, and respect our laws.  These two factors can’t help but influence my assessment of the various candidates vying for the right to run in November to become New York’s chief lawyer.] 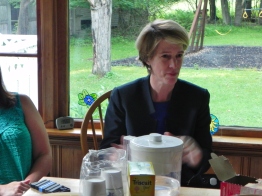 New York’s registered Democrats will have the opportunity on Thursday, September 13, to select an Attorney General candidate with the integrity and knowledge to challenge abuse of power and ethical lapses, not only in our nation’s capital, but in Albany.  In my opinion, that individual is Zephyr Teachout.

The impressive lawyers seeking to be our state’s next Attorney General – Letitia (Tish) James, Leecia Eve, Sean-Patrick Maloney, and Zephyr Teachout – all proclaim the courage to take on Donald Trump.  That attribute is essential these days.  But trust in government will not be restored if we don’t demand that the head of our state’s Department of Law also possess the independence and tenacity to take on Andrew Cuomo and the web of corruption apparent throughout the Empire State.  Zephyr Teachout demonstrated her independence and mettle when she ran against the incumbent governor in 2014.

Not only is she not beholding to Andrew Cuomo, Teachout is unburdened by ties to corporate interest.  While her competitors – most notably, Maloney and James – have received large donations from the real estate industry, she has refused to take corporate PAC money.  [Note:  Teachout’s primary opponents have recently attacked her over her “refusal to take limited liability campaign contributions, and her stated independence from Gov. Andrew M. Cuomo.”]

Zephyr Teachout’s campaign for Attorney General is consistent with the observations she made in an “Another Voice” column in September 2014.  Noting how demoralizing it was to see prominent Buffalo developers awarded huge contracts following sizeable contributions to Andrew Cuomo’s 2014 campaign, she observed:  “[T]he state’s pervasive culture of corruption and ‘pay to play’ must not drive the choices we make to boost Buffalo.”  [Click Another Voice 09-05-14 Teachout on Buffalo Billion for Zephyr’s 2014 op-ed piece.]

I fully agree with the sentiment expressed by the New York Times editorial board:  “New York needs a great lawyer. We believe that Democrats who are seeking a means of standing up to the Trump presidency and graft in Albany can find in Ms. Teachout their most effective champion for democracy and civil rights, good government and the environment, workers’ rights, fair housing and gender equality.”

P.S.  I still can’t get over the irony of the attached 2014 photograph of Andrew Cuomo:  Cuomo’s Restoring Public Trust photo 07-13